Written by Victoria
Updated over a week ago

Fraud is a functionality that defines inappropriate traffic. You can find the metrics related to this functionality in the statistics table (bottom left corner, gear icon): 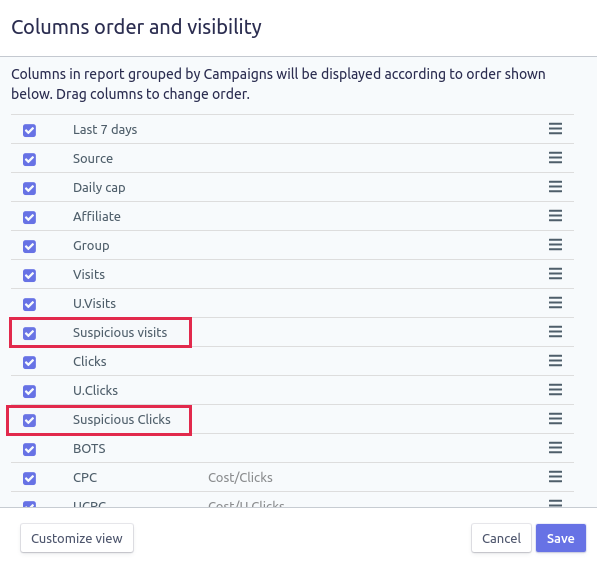 Fraud metrics show how much of your traffic is considered suspicious. Suspicious traffic is divided into two categories:

To find out why the traffic was identified as suspicious:

A report will open, where you can find detailed information, according to which metric visits and clicks are considered suspicious. 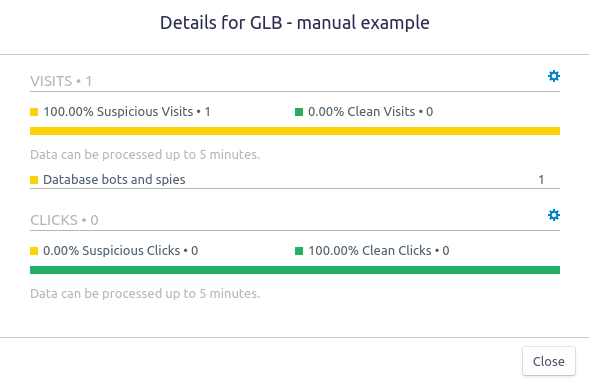 Review each metric below and determine which traffic is unacceptable in your funnels.

VPN and Proxy
Traffic using VPN / Proxy connections. People often use this technology to hide their location, bypass the lock, and are on the Internet under their IP address.

Without referrer
Registration of visits with an empty / non-transmitted referrer.

Unrecognized device
A metric that marks traffic if the user's device is not recognized.

Data сenters
PeerClick uses special software to determine if a visit or click came from a known datacenter by IP address. Data centers such as Amazon Web Services have their own IP addresses assigned to them. Some of the datacenters may be the source of inappropriate traffic, but keep in mind that VPN users can route through the datacenters. Thus, a visit from an IP address associated with the datacenter does not necessarily mean that it is invalid, but it raises that likelihood.

Library robots
A metric that marks traffic if the user agent class claims to be a library.

Ipv6 Traffic
Internet Protocol version 6 traffic. At the moment, it is poorly distributed in the CIS and is not used by private individuals, which increases the likelihood of such traffic being a bot traffic.

Unsupported OS version
Information about the visitor’s operating system and its version can also be obtained from the user agent. If the system is recognized as old or not recognized at all, it is most likely a bot.

Invalid location language
Mismatch of the country and language of the browser / user's device in one event.

Frequent events
A metric that marks traffic if a single IP generates more than 60 events per minute.

Frequent campaign events
A metric that marks traffic if a single IP generates more than 60 events per minute per campaign.

Did this answer your question?